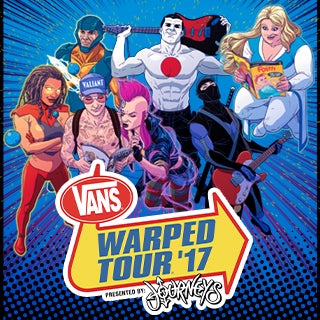 Tickets are on sale now for the July 29th Vans Warped Tour!

Sick Of It All, CKY, GWAR, The Adolescents, Strung Out, T.S.O.L, Hatebreed, Emmure, Anti-Flag, The Ataris and Many Others Confirmed as the Tour Celebrates It’s History of Punk Rock, Metal, Hardcore and More

Now in it’s 23rd year, the Vans Warped Tour continues to solidify itself as the must attend festival over summer for rock and music lovers alike.

In the tradition of celebrating the tour’s musical roots, the lineup includes bands such as CKY, Sick Of It All, Municial Waste, The Adolescents, Strung Out, T.S.O.L, Anti-Flag, Hatebreed and others, who are legends in the punk, hardcore and metal core world.

Returning this year is the Mutant Party Zone, which will provide festival-goers with two stages dedicated to heavy music from bands such as The Acacia Strain, Being As An Ocean, Blessthefall, Carnifex, Fit For A King, GWAR and any more.

The Vans Warped Tour has always been a place of music discovery and this year is no exception – the Full Sail Stage has up and comers like Boston Manor, Creeper, The Gospel Youth, Knocked Loose, Movements, and Trophy Eyes positioned to break this summer.

Overall, the tour continues to offer something for every fan. Showcasing the best in pop punk, rock, hard core, hip-hop, dance and indie

The Vans Warped Tour is the largest traveling music festival in the United States, and the longest-running touring music festival in North America. Originally conceived by founder Kevin Lyman in 1995 as an eclectic alternative rock festival, with a focus on punk rock, over the years the tour has grown to include a multitude of genres, including metal, hip hop, reggae, pop and more. It remains one of the best tours to attend to discover emerging acts, to learn more about wonderful non-profits and companies who are working to make a positive impact on the world that surround them, and to meet like-minded friends.

“As we enter our 23rd year on the road, continuing our mission of music, philanthropy and education is what I look forward to most.  The Vans Warped Tour is not for all, but every summer I look forward to seeing those fans who do chose to come and engage and be a positive force in our community.” - Kevin Lyman

In addition, the tour continues to host a wide array of amazing non-profits and educational workshops for attendees. Teens With a Purpose, American Foundation for Suicide Prevention (AFSP), Donate Life New England, Planned Parenthood, Keep A Breast, Testicular Cancer Foundation, and Project HEAL, just to name a few. Fans can see their favorite bands as well as become educated on these causes and how they can help.

Sierra Lyman comments, "Music has inspired change and social change has inspired music. Since it's inception the Vans Warped Tour created a place where fans are not only inspired by their favorite artists, but also inspired to work with a cause they care about. This is pushed even further by opening up musicians to causes they never even knew about. By creating this community of nonprofits we are able to connect fans with their favorite musicians and also inspire some good in the world."

The Entertainment Institute will return to the 2017 tour as well, hosting educational workshops and Q+A’s hosted by the industry’s most successful writers, artists, and photographers. A full listing of the guru’s hosting each workshop is available at http://www.thinktei.com/warpedtour

Tickets for this year's tour on are sale now and can be purchased at vanswarpedtour.com

As a bonus for early ticket buyers, the first 500 tickets sold for each show will be at the lowest price available and will include a digital download of the Official Vans Warped Tour 50-song compilation.

The 41-date tour will commence June 16th in Seattle, WA and end on August 6th in Pomona, CA.

2017 Vans Warped Tour Line Up – Confirmed Performance Dates for each band and stage:

Fire From The Gods

Sick Of It All

Being As An Ocean

Fit For A King

Stick To Your Guns

Too Close To Touch