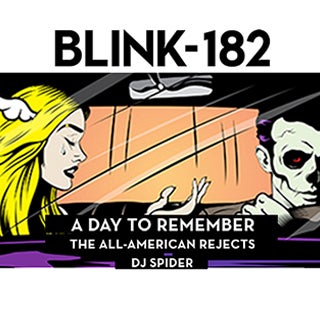 – Tour Kicks Off July 22 and Will Visit Nearly 50 Cities Throughout North America
In Support Of New Album, California, Due Out On July 1, 2016 –

Blink-182, the punk pop favorites of a generation, are back with their highly anticipated seventh studio album, California, set for release July 1, 2016 on BMG.  The band premiered their brand new single, "Bored To Death," on the world famous KROQ radio station in Los Angeles this morning where they also revealed details behind their massive North American summer tour.  The tour, promoted by Live Nation, will kick off on Friday, July 22 in San Diego, Cali. at the Viejas Arena and take the band to nearly 50 cities throughout the U.S. and Canada including stops in Los Angeles, Toronto, Vancouver, Las Vegas, Houston, Atlanta, Dallas, Chicago, San Francisco and more.  A Day To Remember will join the tour as special guests on all dates while All American Rejects and All Time Low will join on select dates.

"Bored To Death" is the first new music since the release of the band's Dogs Eating Dogs EP in 2012.  It's also the first time fans will hear music that was written with Matt Skiba.  Be sure to check out the lyric video to "Bored To Death" here: https://www.youtube.com/watch?v=8yGipyel-3I

Citi card members will have access to presale tickets on select dates beginning Tuesday, May 3 at 10:00 a.m. local time through Citi’s Private Pass Program. For complete presale details visit www.citiprivatepass.com. Tickets on sale to the general public starting on Friday, May 6 at www.livenation.com.