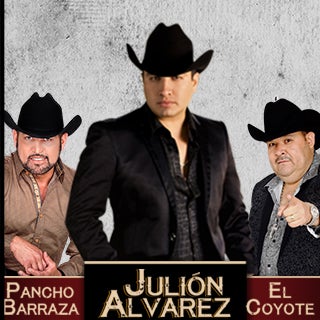 Superstar Julión Álvarez was in Los Angeles today to announce that Julión Álvarez y su Norteño Banda and surprise guests will kick off the U.S. segment of his critically acclaimed Mis Idolos...Hoy Mis Amigos Tour! Friday July 15 at the SAP Center in San Jose.  The superstar and his band will make their way across the U.S. for a total of 22 super exciting concerts in some of the biggest venues in the country including The Forum in Los Angeles, Toyota Center in Houston, Madison Square Garden in New York City, The Coliseum in El Paso, Mandalay Bay Events Center in Las Vegas and more.

At the bottom of this press release can be found detailed the tour information: Mis Ídolos ... Hoy mis amigos Tour.  Tickets for each of these concerts will be on sale from Friday May 13 at 10:00 AM (local time) available through Ticketmaster.com system (except where indicated).

Alvarez is well known in the music industry, because in his live concerts he deliveres an amazing show and provides a super musical production. His loyal and enthusiastic fans love their shows, which are sellout everywhere, earning him the name "El rey de la taquilla" ("The King of the Box Office"). Mis Ídolos ... Hoy mis amigos Tour has earned rave reviews in Mexico. In a major local newspaper, a journalist wrote: "Julion Alvarez returned to the stage with more momentum and renewed energy."

Julión Álvarez is a multi Latin Grammy nominee who earned his third No. 1 on Billboard’s Top Latin Albums chart this month with the album Mis Idolos, Hoy Mis Amigos. He won 3 Billboard Latin Music Awards previously and in 2016 he received the Latin Billboard on the category Regional Mexican Albums Artists of the Year, Duo or Group. Alvarez amounts to 6 Gold albums, 2 Platinum albums and one Double-Platinum album. For more information, please visit: www.julionalvarez.net

About CMN Events: Headquartered in Chicago, Illinois, Cárdenas Marketing Network, Inc. (CMN) is one of the leading Multicultural experiential event-marketing agencies and the largest producer of Latin music events in the U.S. With over 2,800 activations each year since 2002, CMN has been connecting brands with consumers through shared passion points of music, sports, and cultural pride, offering full integration with digital marketing and advertising for all projects and activations. CMN works with a variety of industries, global organizations and emerging businesses, helping them grow and guiding them to become culturally relevant with the Hispanic consumer. In 2015, CMN was named one of Advertising Age’s, “Largest U.S. Hispanic Agencies,” Crain’s “Chicago’s Largest Minority – Owned Firms,” and has been awarded “Best Event/Consumer Engagement Campaign of the year” by Billboard Latin Music Marketing Awards. For sponsorship opportunities, visit www.cmnevents.com.