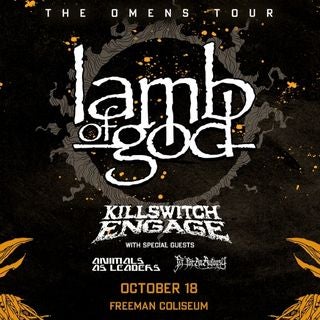 New wave Metalheads, this one for you Lamb of God are heading out on the epic Omens Tour with Killswitch Engage and more special guests on October 18 at the Freeman Coliseum.

Across their career Lamb Of God grew from basement shows and grimy DIY venues to headline arenas. The New Wave of American Heavy Metal architects earned a reverence akin to musical forefathers (and road companions) Metallica, Slayer, and Megadeth.

"For millions of headbangers, Lamb Of God are simply the most important contemporary metal band in the world," Guitar World observed. Timeless songs like "Laid to Rest," "Redneck," "Walk with Me in Hell," and "Now You've Got Something to Die For" became anthems in the heavy metal songbook, with gargantuan vocals born from both righteous anger and devotion, and unrivaled riffs for the ages.

Even as D. Randall Blythe (vocals), Mark Morton (lead guitar), Willie Adler (guitar), John Campbell (bass), and Art Cruz (drums) enjoy one another's company and chemistry like never before, Omens is possibly the angriest Lamb Of God album yet. Densely muscular, soaked in unnerving spite, with a pessimistic eye toward inner struggles and global affairs alike, Omens is a furious entry in the catalog.